"Shez Raja personifies the modernisation of jazz. He is fearless as a musician" - All About Jazz ★★★★+

"A tailor-made festival band with a unique identity" - The Guardian ★★★★

"I thought my head was going to explode. It sounds like it's come from the future!" - Bradford Telegraph ★★★★★

"Chic, contemporary and groove-laden" - The Musician

"Mahavishnu Orchestra with Jaco Pastorius in charge" - The Guardian 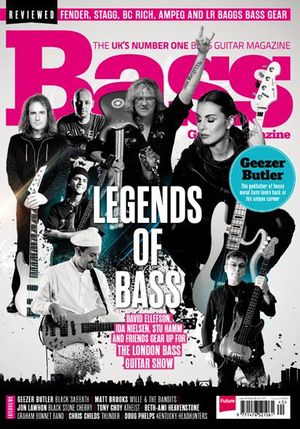 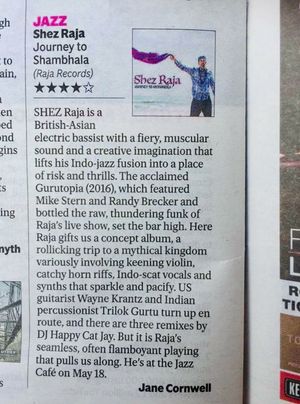 "Shez Raja is a maestro in the classical sense of the word, marrying profound themes with stunning bass technique -- and putting on a hell of a show at the same time!" - Joel McIver, Bass Guitar magazine

"On "Epiphany", an eclectic mix of cultures come to play, and the result is a beautiful and groovy jazz record that will transport you into tranquility . The song is by British-Asian bass player Shez Raja and features celebrated percussionist Trilok Gurtu and renowned guitarist Wayne Krantz" - Aipate Magazine

"British bassist Shez Raja is back with a fantastic, innovative jazz fusion album. It takes talent, courage and an incredible amount of creativity to write an album like Gurutopia. Jazz fusion has never been so alive!" - Erminia Yardley, Kind of Jazz ★★★★

"This UK bassist has been all over the press in the last few months and within the first few bars of the opening song I understood why. The performance was a fiesta of highly charged funk, fusion with an eastern flavour" - Jazz In Europe

"Entertainment was always on the cards at the Gurutopia launch party. A Shez Raja gig is an event. Virtuoso bass playing, a tight, funky band, backward hats, basses thrown in the air. There’s a lot going at a Shez Raja gig and audiences always come away from his shows energised and thoroughly entertained" - Rob Mallows, Kind of Jazz ★★★★

"Inventive bassist gives jazz fusion a good name. Raja turned Indo-jazz on its head with everything from funky bass to freestyle rap"  - The Guardian ★★★★ (live review) 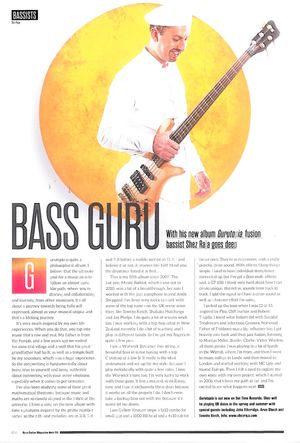 "Shez's music draws heavily on his love of funk and fusion. He's collaborated with the likes of Soweto Kinch, American guitar hero Mike Stern and trumpet giant Randy Brecker and when you see him in action you understand why he has such a loyal following for his groove-drenched music. A masterclass in performing for an audience" - Julian Joseph, BBC Radio

"Another impressive showing from Raja. This album is a rewarding summation of their considerable combined abilities" - The Jazz Mann

"It’s hard to imagine jazz/funk on the current scene with quite such the invigorating edge and retro passion of the Shez Raja Collective. Raja’s no-holds-barred grooving is redolent of the seminal and psychedelic jazz/rock fusion of The Mahavishnu Orchestra, the hypnotic energy of the Zawinul Syndicate and legendary bass genius of Stanley Clarke and Marcus Miller" - Adrian Pallant, AP Reviews

"Shez Raja is a seriously talented electric bass player whose work in a fascinating mix of Indo-jazz, funk and groove settings has propelled him to the forefront of the UK jazz scene. His energetic and extremely fluent playing, combined with his innovation as a bandleader, have drawn comparisons to the style of electric bass legend Jaco Pastorius" - Jazz FM

"Shez Raja personifies the modernization of jazz. He has taken his power-bass imbued sound well past established parameters, merging diverse inflections of raga from Indo-jazz, into the funk/groove format with intense consequences. Raja is fearless as a musician. Gurutopia is a prime example of musical vigor achieved at a high level" - James Nadal, All About Jazz ★★★★+ 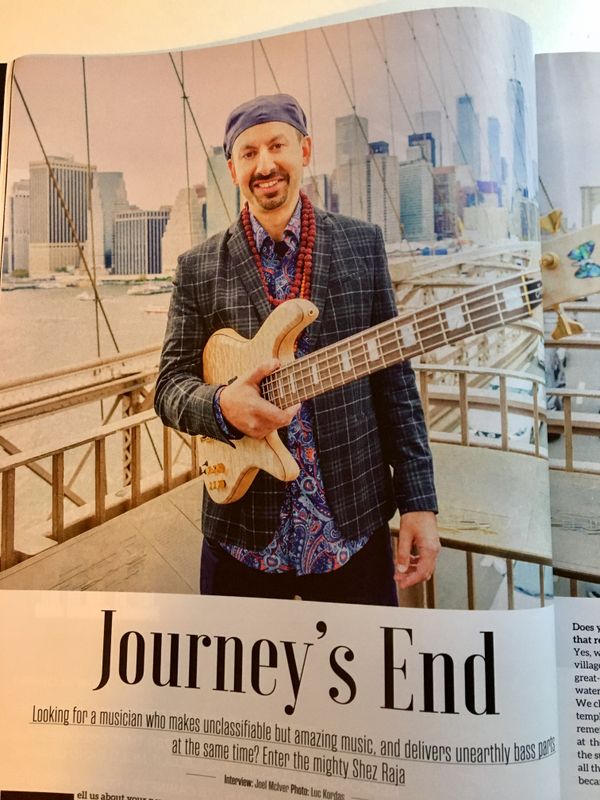 “I thought my head was going to explode. It sounds like it’s come from the future. In fact I don’t even think there is a correct term for this kind of music just yet” ★★★★★ Bradford Telegraph

"Shez Raja has been on fine form of late, not just with his fired-up live performances, but he’s been delivering in the studio too. Diving into an experimental mix of sounds, this is an engaging instrumental album, meshing old-world folk to a finger-snapping new-world groove. An intriguing snapshot of a fast-developing artist in the ascendant" - iBass Magazine

"British jazz's profile benefits from musicians who are charismatic, entertaining leaders as well as scintillating players – and electric funk bassist Shez Raja and his band have been supporting this year's album release, Gurutopia, with energetic, audience-winning performances, including at Canary Wharf Jazz Festival and the EFG London Jazz Festival" - Adrian Pallant, London Jazz

"The Collective has earned a formidable reputation for the exciting qualities of its live shows. A consistently uplifting album, “Soho Live” does a superb job of capturing the energy of a Shez Raja Collective live performance. It's thrilling, energetic stuff" - Ian Mann, The Jazz Mann

"The Shez Raja Collective is a who's who of the British jazz scene. His evocative music blends sounds from his Asian heritage and other forms, creating his own twist on jazz funk. The music is really great" - Julian Joseph, BBC Radio 3, Jazz Line-Up

"If you’re looking for something fresh on the fusion front, U.K. bassist Shez Raja’s new album, Gurutopia, should have you Indojazzfunking in no time. Gurutopia is an audacious, raucous ride through the musical imaginations of Raja and his Collective and continues Raja’s trend of pushing musical boundaries" - For Bass Players Only

“An album that scores high on bright tunes, good ideas and individualism. Led by a virtuoso bassist, there’s always some arresting melodic twist and arrangements which are multi-layered and imaginative” ★★★★ Manchester Evening News

"The Shez Raja band is a great live act. Shez has a great rapport with his audience, cracking jokes, prancing around the stage and playing the guitar like a showman. To some people today's jazz might typify music that is outdated and boring, but Shez Raja's jazz is anything but; it can make you dance and laugh and like the big, yellow sun on the album cover really brightens up your day" - Howard Lawes, Sandy Brown Jazz

"Mystic Radikal is an exciting mixture that's all the more enjoyable because the constituent elements never seem forced or unnatural in combination. It's a melting pot, but without the political connotations of cultural friction. This is fusion music at its most straight forward and entertaining" - George Mitton, All About Jazz ★★★★

"It's an energy rush and I think that's why he connects with audiences. There's also that sense of fun, that drive, he's an entertainer. We all had a great time" - Kevin LeGendre

"There's a Headhunters-like bravura to some of bass-guitar virtuoso Raja's dynamically funky music. If the Mahavishnu Orchestra were reformed with a reincarnated Jaco Pastorius in charge it would sound pretty similar" - The Guardian

“Shez Raja reached out to a capacity crowd at the Dean Street Pizza Express with an accessible groove-based approach. Raja delights in matchmaking genres from different continents, and achieves some fascinating results in the process. The band’s (and the audience’s) enjoyment was palpable, driven by Raja’s irrepressible energy and amiable patter between numbers and had it not been for the tightly-packed tables and chairs this audience would have certainly been on its feet.” – Live review – Sebastian Scotney’s London Jazz Blog

“Stylish brand of noirish uptempo jazz funk. Raja’s is a global groove, with rock, and world music flourishes thrown in. If you want to hear the bass guitar as something other than a rhythmic underpinning then check out his silky playing on the gorgeous piece Angel’s Tears” – Yorkshire Evening Post

“Mystic Radikal is a strong album through and through” - BluesandSoul.com

"Your wonderful CD "Mystic Radikal" sounds astonishing. The bass playing throughout is controlled and innovative and always "in the pocket". Love the writing too, great use of uncommon modes and rhythms. A wonderful mixture of grooves and melodies, from kick ass to meditative. The way your solo piece "Music for Elves" goes into "Carnival of Colours" is great, a real good feeling vibe! The duet with Monika at the end is superb, very moving" - Laurence Cottle

“Shez has a masterful way with catchy melodies and his Stanley Clarke-inspired playing leads confidently from the front. A highly satisfying album full of joyful surprises” – The York Press

"Indo-jazz-funk innovator Shez Raja is a creative force to be reckoned with. Latest release, Gurutopia, features contributions by jazz giants Mike Stern and Randy Brecker and has received rave reviews from both music and mainstream publications from around the globe." - For Bass Players Only

"This work grows in boldness and variety" - John Fordham, The Guardian

"Raja moves easily between powering the rhythm section’s riffs and lending the frontline another very effective voice and his ability to compose memorably as well as give players room to shine makes it easy to hear why Brecker and the ever-exuberant Mike Stern answered his calls" - Rob Adams, The Scotland Herald

"Which is your idea of the F word? UK fusion hasn't gone anywhere much since the hey-day of Roadside Picnic two decades ago, while on a bad day funk seems to have become just another stylistic gesture. Then along comes the Shez Raja Collective, proffering a fine new album with Andy Sheppard and Claude Deppa guesting and a clutch of upcoming dates which not only provide a welcome antidote to both of the above but which rehabilitate the electric bass (again) in the process" - Roger Thomas - Editor, Jazz UK

“Bass guitarist Shez Raja brings his Asian roots to bear on his approach to jazz, and adds more besides. The band creates a colourful, accessible blend of electric jazz-fusion” – The Scotsman

“The Shez Raja Collective played a high-octane mix of fresh and older material to launch their new album Mystic Radikal with special guests Andy Sheppard and Monika Lidke at the Pizza Express in Soho. This was a Collective which was both informal and on form. The interplay between Roggen and Liddard was good throughout, combining the duality of Raja’s composition with energetic soloing. Raja himself was near flawless, prowling the stage and clearly enjoying himself. Sheppard’s own interest in Asian and African music bears credence to Raja’s musical template, and there was genuine interest on his part for the music being laid down.” – Live review - Jazzwise

“Really dug his Bootsy-esque sound mixed with some good old British humour in between tracks. It's always great to hear the bass successfully working as a melodic, lead instrument a la Marcus, and Shez's keys player did a great job holding down the bottom end when required to. Shez's grooves were dynamic and fun to listen to and he really commanded the band as you'd have hoped. His passionate performance really captured his integrity to the bass as an instrument. Good times!” – Live review – Bass Guitar Magazine

“Every track seems to have a different flavour. It’s a bit like an Indian meal. Each course takes your ear-buds to a different level” – Raiders FM

"Quoting ‘bass’, ‘groove’ and ‘fusion’ in the same conversation is likely to summon thoughts of Stateside heavyweights Jaco Pastorius, Stanley Clarke or Marcus Miller – so it feels something of a privilege to flag up and recommend the progressive, impassioned contribution to UK jazz/funk being made by five-string electric bassist Shez Raja.
The charismatic, frequently white-clad bassist invites renowned personalities Mike Stern (guitar) and Randy Brecker (trumpet) to feature amongst this feel-good blast of eight self-penned compositions. Retro glints abound in this sizzling music, but Raja’s penchant for original heady riffs, grooves and improvisation clearly marks out his own sound world for the here and now. Shez Raja and colleagues never fail to brew up a storm at their London gigs – but crank up Gurutopia (loud), and you can be there, too" - Adrian Pallant, LondonJazz

“It's jazz, but not like you've heard it before - boundary-pushing band Shez Raja performs songs from new album Mystic Radikal live for us in the studio” – New Zealand national TV show ‘Good Morning’ (TVNZ One)